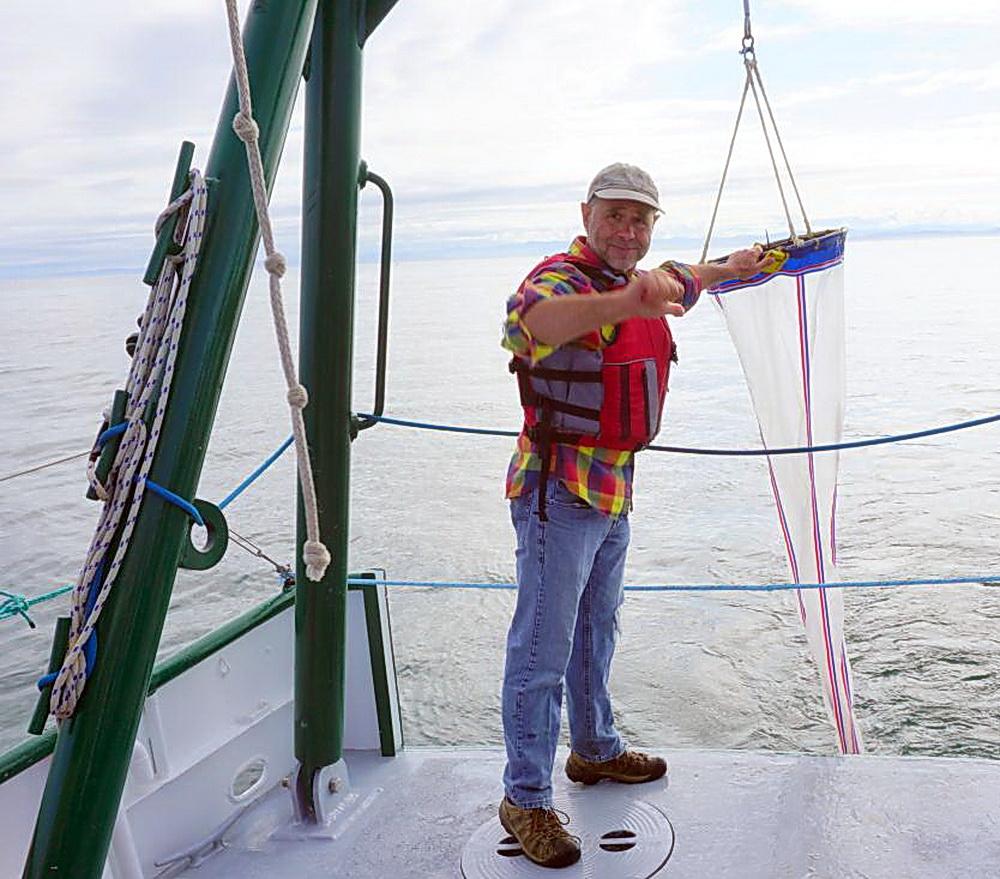 Larry Basch on the research vessel Pluteus.\Photo by Brent Lerwill.

During its last meeting, the Oregon Shores board welcomed two new members through interim appointments.  Both will stand for election to full terms in the coming winter’s general membership election.

The board also elected officers.  Allison Asbjornsen, a former board president, will return to this role, while Wayne Rifer, who has been serving as president, steps into the secretary role.  Leslie Morehead continues as treasurer.

The two new board members bring with them significant strengths that fill important needs for the board and the organization—different, but highly complementary.

Larry Basch is a marine ecologist, scuba diver, naturalist, and community conservation activist in Coos County. Currently a research associate at the University of Oregon’s marine station, the Oregon Institute of Biology in Charleston, Dr. Basch has worked in coastal and marine environments from the tropics to the poles and from intertidal rocky shores to the deep sea -- throughout the U.S. west coast, the Pacific basin and islands, Central and South America, Europe, and from Alaska to Antarctica. He has the distinction of having spent, cumulatively, close to a full year working underwater in the course of his career, studying temperate-boreal kelp forests, coral reefs, polar, and other subtidal ecological communities worldwide.  He has his Ph.D from the University of California at Santa Cruz, and was a postdoctoral fellow at the Scripps Institution of Oceanography.

Jamaal Green is a doctoral candidate in the Urban Studies and Planning Department at Portland State University. He brings with him a passion for planning and for environmental justice, and also some highly relevant technical skills (such as GIS mapping). Green received his earlier degrees from the University of North Carolina in Chapel Hill. His masters’ thesis compared two state cluster initiatives, and explored how differences in organizational structure and political control lead to the downfall of the better-funded initiative and the success of the much smaller, less well-funded, but grassroots-supported effort. His dissertation work explores an emerging set of industrial land protection policies and their effects on local labor markets. Jamaal is principally interested in the intersections of land use, economic development and social inequality.

Beyond his academic work, he served on the Emerging Leaders Board of the Oregon Environmental Council where he assisted OEC with the diversity and equity sections of their strategic plan and sat on their program committee to advise on certain matters on policy.  (A big thanks to OEC, who sent Jamaal our way when he had completed that program.)  He is passionate about attacking social inequity in all areas but particularly with respect to the environment and believes that all environmental organizations, as they move forward into the 21st century, should embrace environmental justice as a core issue to better understand a more expansive view of the costs of pollution as well as expand their movement to populations traditionally ignored.

Oregon Shores is counting on these new board members to provide a jolt of energy while filling gaps in the knowledge and backgrounds of the existing board.