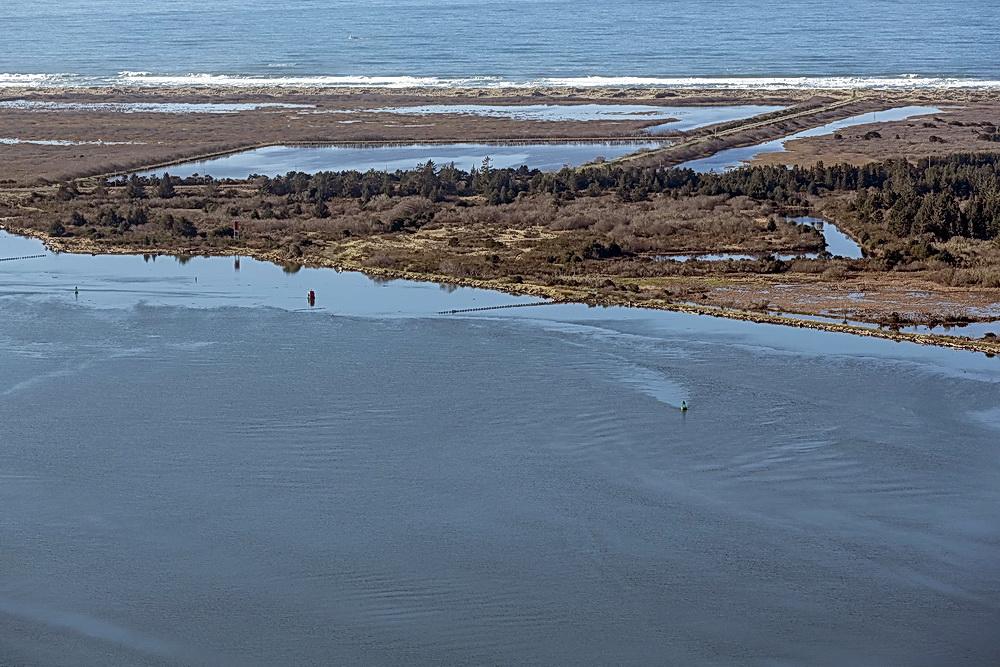 As expected, the Federal Energy Regulatory Commission (FERC) granted its conditional approval to the Jordan Cove LNG export terminal proposed for Coos Bay’s North Spit on Thursday, March 19.  The approval also includes the associated Pacific Connector pipeline, which would carry the gas across the state to the terminal, where it would be liquefied and shipped.

While not insignificant—the project does require federal approval—this is not at all a definitive step. The approval is conditioned on Pembina, the Canadian fossil fuel corporation behind the project, receiving essential permits from the state of Oregon. Even Neil Chatterjee, the Republican-appointed, unswervingly pro-fossil-fuel FERC chair, stated that Jordan Cove’s “certification does include provisions to file documentation that it has received all applicable authorizations before construction begins on the pipeline.”  The question is whether the project will ever receive these necessary authorizations.

Among those authorizations would be those from Oregon’s Department of Environmental Quality (under the Clean Water Act); the Department of State Lands (for dredging removal and fill); and the Department of Land Conservation and Development, certifying that the project qualified under the state’s Coastal Management Program.  DEQ and DLCD denied Jordan Cove permission in no uncertain terms; it was obvious that DSL was also on the verge of doing so when Jordan Cove abruptly withdrew its removal-fill application.  Oregon Shores has been heavily engaged in urging these agencies to turn Jordan Cove down.

In order to gain approval under Oregon’s Coastal Management Program (CMP), Jordan Cove and Pacific Connector would need not only permits from state agencies, but local approvals under Oregon’s land use planning laws.  The local jurisdictions involved—Coos County, and the cities of Coos Bay and North Bend—have been eager to grant approvals to the project.  However, those approvals are being appealed, more or less across the board.  Oregon Shores has four appeals of local decisions pending before the state’s Land Use Board of Appeals, and we are intervening in support of the Confederated Tribes of Coos, Lower Umpqua, and Siuslaw Indians on a fifth.

Under the Coastal Zone Management Act, the federal government is required to be consistent with recognized state coastal management plans, which is why DLCD denied certification before and should do so again if state agencies continue to deny permits and/or if our appeals of local land use decisions are successful.  The lack of any of these permits would mean that the project did not meet the standards of our CMP, and “federal consistency” under the CZMA should mean that the federal government wouldn’t allow it, either.  Of course, under the current administration, anything can happen—we are waiting to see whether the Trump administration attempts to ignore federal consistency and push the project through.

On the same day that FERC delivered its decision, Jordan Cove (which is to say, Pembina) appealed the state's denial of CZMA certification to the Secretary of Commerce.  This step does exist within the CZMA law, but it is almost never used.  The likelihood is that Wilbur Ross, the Trump-appointed secretary and another fossil fuel enthusiast, will grant the appeal.  At that point the appeal would move to the courts.  Oregon Gov. Kate Brown, who has remained neutral on Jordan Cove, issed a statement today expressing determination to do everything possible to prevent the federal government from assaulting the integrity of Oregon's process.

Impacted landowners, Tribal governments, environmental organizations including Oregon Shores, and other intervenors now have a 30-day window to appeal for a rehearing at FERC. The state of Oregon may also petition FERC for a rehearing.

This is a dynamic and constantly changing situation.  More developments can be expected soon.  Oregon Shores is deeply committed to battling this misbegotten proposal in every possible way.