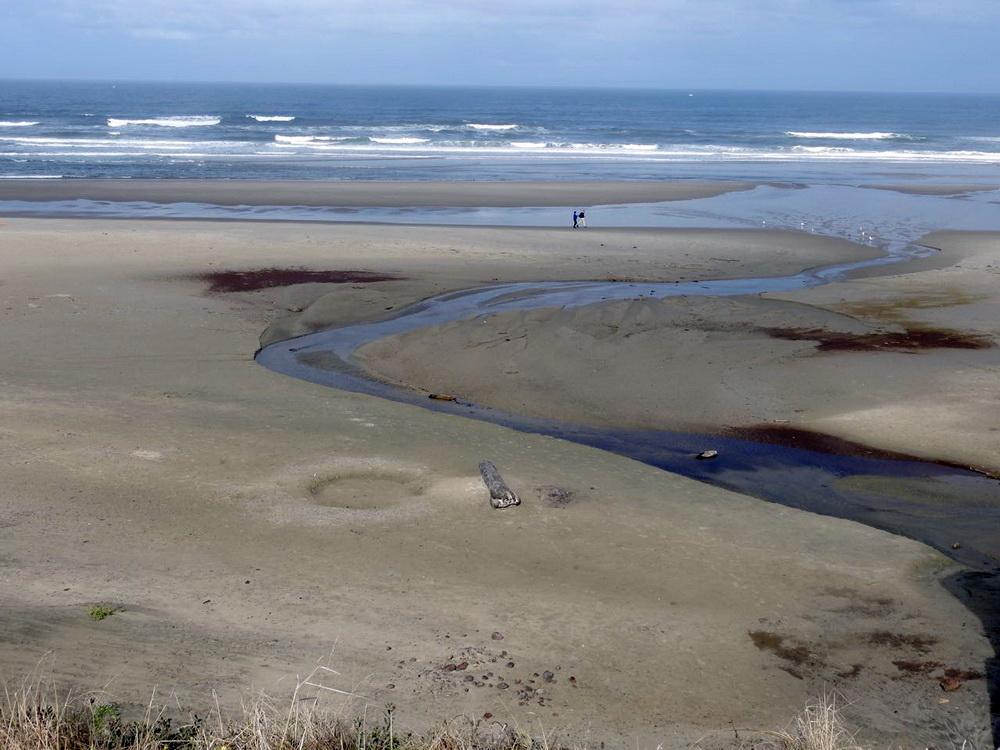 The Oregon Health Authority has continued to issue new health advisories throughout the summer.  The last major alerts were announced in August, for the Newport and Neskowin areas; the advisories for ocean waters touching the shore in these areas have now been lifted.  However, the freshwater sources that are the cause of the problems remain polluted.

One health advisory was declared for Nye Beach in Newport in the last week of August, which ran past Labor Day.  High bacteria levels were found both in the fresh water emerging from the drainpipe at the Nye Beach turnaround, and in the beach water on the shore just to the west.  Another advisory was issued on Friday of that week for Neskowin's beach, near the mouth of Neskowin Creek north of Proposal Rock. Dangerous levels of bacteria were also found in Hawk Creek, and in Neskowin Creek upstream of its confluence with Hawk Creek.

While the ocean waters are now considered safe (though still with significant bacteria counts), the freshwater sources still are at dangerous levels.  However, only beach water results trigger official advisories.

Earlier that week, high bacteria levels were found in two freshwater sources in the Rockaway area.  One was Rock Creek, the other for Saltair Creek (ironically, adjacent to the eroding property over which a controversy about the owner's application for riprap has been raging). These locations, like many others this summer, tested well above safe levels of bacteria (enterococcus). The Oregon Beach Monitoring Program is federally funded through the BEACH Act, and allows for health advisories only for marine water, so high readings in freshwater sources don't trigger official alerts, despite the fact that these are generally the origins of the bacteria found in the ocean waters washing the shore.

Earlier advisories issued this summer have also now been lifted, but the fact that they were necessary at all points toward the effect of land sources of pollution on our nearshore ocean waters, and there is no indication that the onshore sources of the problem have abated.  In Rockaway, concerned citizens have demanded that their city council take action to determine the sources and address the problems in creeks crossing that city.

While an advisory is in effect, visitors should avoid wading in nearby creeks, pools of water on the beach, or in discolored water, and stay clear of water runoff flowing into the ocean. Even if there is no advisory in effect, officials recommend avoiding swimming in the ocean within 48 hours after a rainstorm in these areas.

Advisories are issued when water samples indicate higher-than-normal levels of fecal bacteria, which can result in diarrhea, stomach cramps, skin rashes, upper respiratory infections, and other illnesses. Direct contact with the water should be avoided in these areas until the advisory is lifted, especially by children and the elderly, who may be more vulnerable to waterborne bacteria.  Increased pathogen and fecal bacteria levels in ocean waters can come from both shore and inland sources such as stormwater runoff, sewer overflows, failing septic systems, and animal waste from livestock, pets, and wildlife.

The status of water contact advisories at beaches is subject to change. For the most recent information on advisories, visit the Oregon Beach Monitoring Program (OBMP) website or call (971) 673-0400, or (877) 290-6767 (toll-free).

This episode underscores the importance of testing ocean waters on our beaches. Since 2003, state officials have used a U.S. Environmental Protection Agency grant to monitor selected Oregon beaches (generally, those most frequently visited) and make timely reports to the public about elevated levels of fecal bacteria. Oregon state organizations participating in this program are the Oregon Health Authority, Department of Environmental Quality and Parks and Recreation Department.

OBMP samples16 beaches on a rotating basis using the current “beach action value” (BAV) of 158 colony forming units of bacteria per 100 milliliters  (cfu/100 mL); BAV is the action level at which advisories are issued and lifted.  Details about monitored beaches, sampling locations and schedule can be found on OBMP’s webpage.

These recent episodes also underscore the reality that far too few beaches are tested.  This is, of course, a funding issue.  They also demonstrate that we are failing to control land-based pollution, and thus fouling the ocean waters that touch the beaches that we enjoy and depend on for everything from solitude and nature study to tourism.

You can subscribe to the OBMP listserv for the north, central or south coast areas, or all three, and receive weekly water quality alerts.  To put yourself into the pipeline for information, contact Tara Chetock, program coordinator, tara.a.chetock@state.or.us.