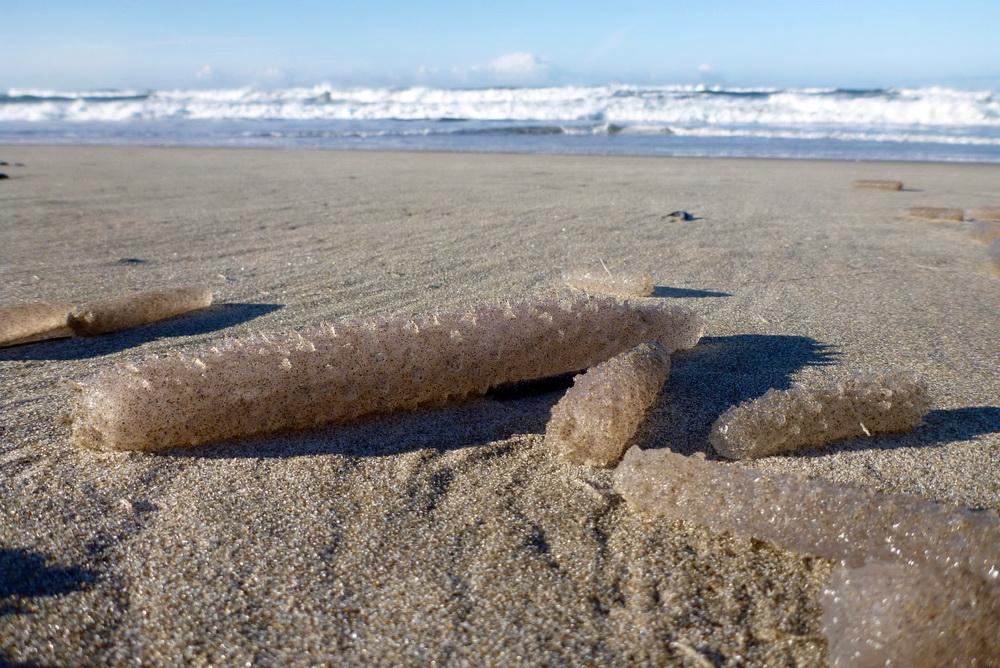 Pyrosomes washed up on the beach.\Photo by Steve Morey.

The Hatfield Marine Science Center (HMSC) Seminar Series is hosting a talk on a subject of great recent interest to marine scientists and beachcombers alike, the massive quantities of pyrosomes in our waters and on our beaches that showed up a couple of years ago, and may arise again due to changing ocean conditions.  On Thursday, Jan. 9, 3:30 p.m., Rick Brodeur of the NOAA Northwest Fisheries Center will speak on “Causes and consequences of the great pyrosome bloom in the Northern California Current.”  The talk, free and open to the public, takes place in Guin Library Seminar Room at the HMSC (2030 S.E. Marine Science Dr.) in the South Beach area of Newport.

Dr. Brodeur is a research fishery biologist in the Fish Ecology Division of the Northwest Fisheries Science Center of the National Oceanic and Atmospheric Administration (NOAA).  He is also affiliated with Oregon State University and based at the HMSC.  He studies the effects of ocean conditions on the distribution and feeding behavior of marine fishes, and is interested in other “trophic levels” from zooplankton to marine mammals.

His description of his seminar topic:  “Pelagic urochordates (salps and appendicularians) are dominant components of oceanic, low productivity waters globally and have been studied with some regularity in many ecosystems.  However, colonial pyrosomes, are generally restricted to oceanic tropical seas and have been far less studied.  The subtropical species, Pyrosoma atlanticum, has periodically been sampled off Southern California.  With the advent of anomalously warm conditions (Warm Blob) in the Central North Pacific in 2014, P. atlanticum started appearing north of its known latitudinal range in coastal trawl surveys off Oregon and Washington, continuing to increase dramatically for the next four years and becoming the dominant component of pelagic surveys in 2017 and 2018, but retreated to southern waters in 2019.  These massive blooms impaired commercial fisheries and washed up on beaches prompting public concerns.  Due to the paucity of information on this species outside its normal range, the horizontal and vertical distribution, habitat preferences, energy density, diets based on fatty acid and stable isotopic signatures, grazing rates, and utilization by higher trophic levels were examined.  Since this tropical invader may become established in this productive temperate ecosystem, understanding its ecology and potential impacts to the pelagic and benthic food webs and human utilization may fill critical gaps.”

For the live broadcast of the Thursday Seminar via Adobe Connect, visit:  http://oregonstate.adobeconnect.com/hmsc-fw407/